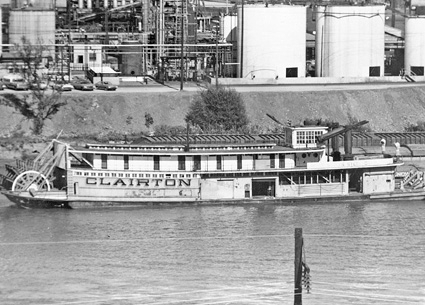 The steam engines were built for the Steamer CLAIRTON, once part of the U.S. Steel Corporation’s towing fleet on the Kanawha River in West Virginia. She pushed steel and coal until the modernization of diesel engines made even the most powerful steam machinery obsolete. The CLAIRTON was purchased by the New Orleans Steamboat Company in 1974 and towed to Louisiana, where her four engines (2,000 hp total) and steering gear were transferred to the Steamboat NATCHEZ. (photo from University of Wisconsin Digital Collection)