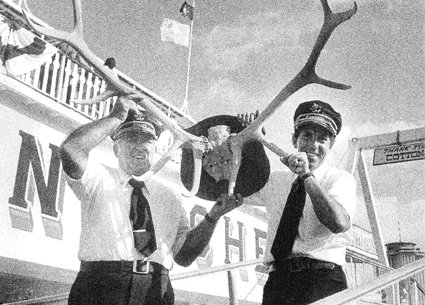 In April the NATCHEZ competed in her first steamboat race against the Delta Queen as a fund raising event to benefit restoration of St. Louis Cathedral. A marble plaque in the Cathedral lists the NATCHEZ as a patron. She easily won the race and earned her Antlers, a traditional trophy of steamboat races since the 1850s. The NATCHEZ has since raced the AMERICAN QUEEN, MISSISSIPPI QUEEN, PRESIDENT, BELLE OF LOUISVILLE and the diesel powered BELLE OF CINCINNATI and CREOLE QUEEN …and has never given up her antlers. As the saying goes, “No one matches the NATCHEZ!”

The Riverboat City of New Orleans&n…