Steamboat NATCHEZ and the History of Mississippi River Steamboats

The only true steam-powered on the Mississippi today, the Natchez is a memorial to the voluptuous curves and ornamentation of an earlier day, for the straight lines and flat planes of contemporary cheap construction were shunned. She has the full Mississippi packet bow treatment with twin stages and a lofty jackstaff. She is an honest sixteen miles-per-hour boat. She has never lost a race. 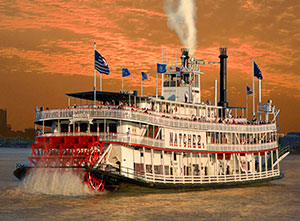 Frances Coppola says, “Kerri McCaffety turns the places she photographs into poems,” and she certainly does in her nineteenth book, capturing the graceful, antebellum beauty of the Steamboat Natchez. In the text, McCaffety together with the original commander of the Natchez, Clarke C. Hawley tells one of the greatest stories of all time—the story of the Mississippi River and the Golden Age of steamboats, the adventure and romance that inspired Mark Twain and captivated imaginations around the world.

The first steamboat plied the waters of the Mississippi in 1811. When that steamer, called the New Orleans, arrived in her namesake city, Captain Roosevelt invited the public to come aboard for an excursion down the river and back, a route very similar to the daily cruises the Natchez offers today.

In the nineteenth century, steam power changed the world, opening up travel and trade undreamt of before. The South got rich on the exports of cotton and sugar, all carried by the big, beautiful boats. When railroads began to offer more efficient cargo transport around the turn of the twentieth century, the second golden age of the steamboat focused on luxury and entertainment. Steamboats took New Orleans jazz from Storyville to the rest of the world.

The first of ten steamboats named Natchez for the Mississippi port city or the Indian tribe, was a sidewheeler built in New York in 1823. She carried passengers and cargo from New Orleans to Natchez. Since then, the Natchez name has meant ultimate beauty and speed on the big river. The most famous and colorful steamboat commander of the nineteenth century, Captain P. T. Leathers, built eight boats named Natchez. His sixth was the racer in the epic 1870 competition with the Robert E. Lee.

The new Natchez, built in 1975, carries on a grand tradition. Her original master, Captain “Doc” Hawley, is a modern-day river legend and the world authority on steamboat history.

To purchase this grand book of river history, tall tales, and beautiful photography you can call 504-587-0733, or order on line with paypal at: