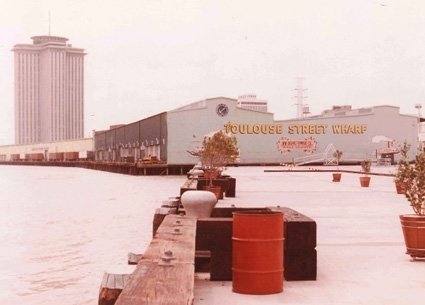 Bill Dow, whose family owned the Lake George Steamboat Company, came down from New York to attend a dry docking seminar in Mobile, AL. Afterward, instead of flying home, he was pulled to visit New Orleans, a city he’d never visited. Bill walked out to the Mississippi River and saw the dilapidated Toulouse Street wharf, a disappointment considering the early days of this port city. Bill found the nearest payphone and called his father Wilbur E. Dow, Jr. , who was worried sick about his whereabouts, and said, “Dad, we need to put a steamboat here!” The Dows were truly the pioneers of riverfront development in New Orleans. (image was taken after renovation)

And in New Orleans it even feels a bit like Fall. …

Due to potential inclement weather we have cancelled cr…

Labor Day Weekend Cruises Take this link to join us …